Alan Clark shares with us a moment of Thursday reflection. 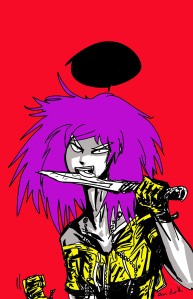 On this horrid day of our Sky Lord, May Something, 2019, we have been blessed by those cosplaying our Bible stories once again, and they’ve decided plagues were a good way to start the week. Shit we could easily wipe out in this day and age, and which warped your grandparents’ lives and fragile psyches, is making a big comeback.

The current generation has become jealous, and wants to return to the days when plague was common—simply one more part of that adventure called Life. Grandpa & grandma can’t have all the fun, now can they? Luckily, chair technology has made life more tolerable, and developers have added the drug-pouch and drug feeding-tube attachments, allowing a person to be completely blissed-out as the world burns to a lovely oak cinder. We sit in our lazychairs, masturbating between tasks in some kind of ritualistic rebranding called self-love. I guess jerking off had become toxic, and needed a new name to convince people to avoid each other and just touch themselves. Luckily for us, Amazon has added the new dumptruck option, where the aforementioned dumptruck of laxatives shall be delivered with feeding-tube, funnel, or whatever floats your boat, helping you to maintain your gender-free fatless body. Or, for those more loving of their fat, and who wish to improve their girthy size, the laxatives may be easily mixed into your food, allowing you to consume twice the amount of food any normal human being should. But it’s self-love, so it’s morally good now! Either way, a trained professional will be ready to help you shit out your collective ovaries and meaty chunks into the ocean pissbowl, all of it helping to season our next extinction event.

And what about that president we seem to have received gift-wrapped on our doorstep? We knew back on Day 1 that Trump was gonna show signs of syphilitic madness, but now the Mutant Cheetoh McRapealot wants his mad rule extended another two years as some sick reparation for the actions of the defunct, almost useless, Democrats. Trump is gleaming so brightly with radioactive sweat-beads the size of horse ejaculate that it’s possible he may have been responsible for the recent uptick in plane crashes. This seems the only explanation as to the purpose of his evil orange tan, mixed with raw chicken that’s been left out in the Arizona sun for a week. You can see his gleam from space. Many passing alien lifeforms consider it a marker of something which they should avoid.

Ever since his photo-shoot with the Legion of Evil, he’s been getting serious about how quickly he can gang-rape the country into a well-meaning suicide attempt before things can heat up at the next gala, wherein they’ll pick another shape to grope. Geometry has never suffered so greatly till now.

It’s days like these that make me wish I was a time-traveling abortionist. Oh, the good I could do. Real good.

BLESS THE BASTARDS, FOR THEY ARE HOLY AMONGST THE PISS-DRENCHED.